This Clash of Clans (COC) is an epic combat strategy game which is very addicting. The raids, loot, war, defense, battles and so much creativity makes it the best game ever which makes me play the game even more. In this article you will learn how to play Clash of Clans (COC) on one Android device i.e, Multiple Clash of Clan accounts means you will be able to play it using two or more i.ds.

Actually, I too play with 2 accounts. Initially, I didn’t know about the importance of gems and wasted many of them. If you are a COC freak then you must be knowing their importance. That’s why I decided to play with new village without deleting the previous one. Now I only swap the Gmail accounts and play with both villages on the same device. Changing between different villages is damn easy and just takes couples of a second to fully enter your second village.

With many players playing with multiple accounts, beginners might get confused and lost of their village, but it’s not that hard to get CoC village back as the team super cell is quite responsive. Let’s put this topic aside and work on how to play Clash of Clan with multiple villages.

How To Play Clash of Clans With Multiple Account

For playing with multiple accounts, you need to have two Gmail accounts or more if you planning to play with lots of villages. In case you don’t have the second village, create a new village and after that follow this procedure. Starting a new village is quite confusing and people often make mistakes. All the game must be linked to Google accounts otherwise you will lose your village. If you have all these prerequisites then follow below steps.

1. First of all, you need to have two or more Gmail accounts. As each village will be linked to a single Google account.

2. On your Android device open settings. Now, look out for “Add an account” option under settings.

3. You need to add Gmail account which is associated with your new village of COC. You can any number of accounts and start playing with them 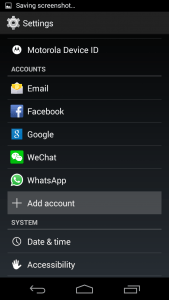 6.  After adding Gmail account, open Clash of clans and visit settings. The option is easily available of the right bottom corner. In case of any doubt, have a look at below 1 min video, else carry on with the screenshots to have a clear idea. 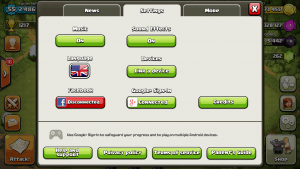 7. Double tap on Google sign in. A pop up display your all added Gmail accounts. Choose the one in which you have linked your second village. 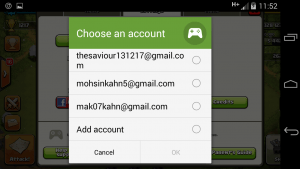 8. The game will ask for confirmation. Type CONFIRM in capital letters and hit okay. A warning message like “current village will lost” will pop up on screen. It’s normal, don’t need to worry. If you have linked game with Google+ then it will remain save forever. Your second village will be loaded in few moments.

When you want to swap back to your previous village, simply go into COC settings and tap on the G+ logo twice. Same procedure needs to be followed as above. It will pop up a sign in screen. Tap on your account that you started originally and when prompted type CONFIRM and tap “Okay”. The game will restart with the desired village.

This method doesn’t require root or jailbreak process. Yes, you can have multiple clashes of clans of accounts without rooting.

Did it work for you? Feel free to ask any query related to this topic.