I remember the day when my mobile used to have infrared for file transfer. As the technology evolved, Bluetooth came into existence. Little did we know that there is a way to transfer file 50 times faster than Bluetooth. Transferring files through Bluetooth is a test of patience. It is very slow, and so you should look for a different way to exchange files between two Android devices which is fast and thereby saves your time. You should be aware of the best file transfer apps that help to speed up the file transfer fifty times than the Bluetooth file sending rate.

There are many apps for Android & iOS to speed up file transfer. It is very interesting and everyone should be well informed about this. Given below are a list of the six best file transfer apps that you should consider using.

This app deserves to be in the first position of the list because it is equally good as the other apps mentioned above in this list. This is a fabulous app to have on your phone. It has a beautiful user interface and it works more beautifully. If I have to be honest, then this app is the gives you the fastest way to transfer files like music, videos, apps, docs, and photos. This app helps you to exchange all types of files between multiple mediums at a very high speed. The app is quite easy and smart to use.

Sending big files like movies happens within a minute or two in this app, you will never hesitate to exchange heavy files if you have this app. The app is forty times faster than the rate of transfer speed in Bluetooth. This app also has the feature of group sharing which is quite a smart feature to have. The group sharing feature in this app allows you to connect up to five people at a time to exchange files. 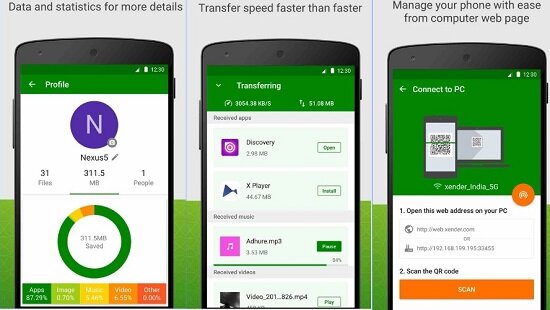 Xender, Sharing, File Transfer is a file transfer app which is fifty times faster than the file transfer speed of Bluetooth. The app works at a very high speed which makes it easier for us to exchange big sized files between multiple platforms without any hesitation. The app requires no internet connection to work. It uses the WiFi direct feature of your phone to transfer files. Sharing files happens in seconds with the app.

One of the unique features of this app is that it provides a feature called group sharing which saves a lot of time and labour. You can send things to all at once. And in this group sharing, you can add up to five people at a time to transfer your files. This put an end to the problem of “re-establishing connection”.

SuperBeam is also the most popular and one of the best file sharing apps available in the Android’s play store. The app uses the Wi-Fi direct feature of your smartphone to transfer files. The app also provides QR code pairing for people who dislikes typing passwords. If any phone does not have the WiFi direct feature, it automatically switches to the hotspot mode. If the WiFi direct fails, it can also the existing WiFi network between the two Android devices to transfer files, which is a great alternative to have in this app.

And this is the only thing which is making this app different from the other apps which are available in the market. So if you do not want to test your patience by transferring files via Bluetooth and the files are too large to send via Bluetooth, you can download this SuperBean app to send files at a lightning speed. 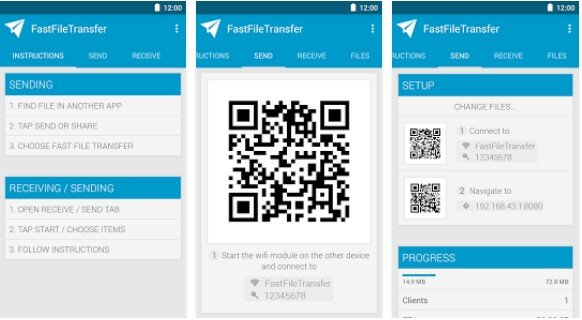 Fast File Transfer is also quite a popular app for transferring files at a very high speed between two Android devices. This app also helps you to exchange files between multiple platforms even when you are offline. This app has the capability of sending a file of 1GB in just four minutes which is quite impressive. The rate of its transferring speed is beyond our imagination.

One very beautiful feature of this app is that you can send a whole bulk of files to another device by combining all the files into a zip format. The transferring speed of this app is high and it takes really very less time to transfer big files. 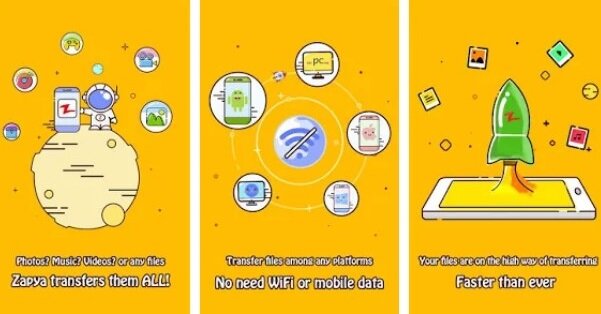 Zapya is also a quite interesting file transfer app available for smartphones. The app also has cross-platform file transfer features which help you to exchange files between multiple types of devices like Android, iOS, Windows phone, and PC. This app helps in exchanging all types of files like music, videos, pictures, and docs without any kind of network whether it is mobile network or WiFi connection. Zapya guaranteed that this app is 128 times faster in transferring files than Bluetooth.

It is the most popular and apparently the best Android app for fast file transfer. This app helps in sending and receiving all types of files between Android devices. It uses the WiFi connectivity feature of your smartphone and not the Bluetooth. The app helps you to share all kinds of files like music, videos, apps, docs and pictures between two Android devices.

The app works thirty times faster than what Bluetooth takes in sharing files. And the most important thing is that you do not have to pay a single penny as network charge. The app works even if you do not have a sim card in your phone because the app uses the WiFi connectivity feature of your device which gets connected to another Android device before you start sharing your files.