Since its inception in 2015, Hotstar has traveled a long way; it was initially launched as an android alternative to watch the 2015 ICC World Cup. However, after its launch, it has bravely ventured into dangerous waters, even to the extent of challenging international rivals with a broader resource base. Even though it is a location specific app, it has quickly proved to be a major competition to Netflix; being rated at a high 4.3, Hotstar is not very far behind it, which grabs a 4.4 on Play Store.

The secret ingredient to Hotstar’s success can be attributed to the talent and efforts of an emerging group of young individuals in the Indian entertainment scene known as AIB. Hotstar in collaboration with AIB paved the way for many emerging Indian entertainment platforms on the Play Store.

Furthermore, Hotstar’s success can be connected to a number of user plans and carefully selected content, along with a minimalistic user interface which goes easy on the eye. Having a separate website, which can be accessed from anywhere in the country, serves to be a good technique to retain its users too. 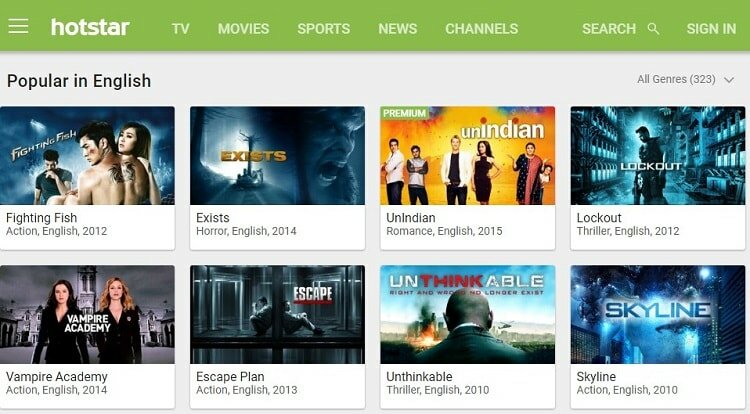 Hotstar holds the content from different genres and Languages. English, Hindi, Bengali, Telugu, Marathi, etc. Hotstar is the most diverse streaming site available online.  The content is sorted under many different heads, viz., TV, Movies, Sports, Premium, News, Channels, Languages, and Genres. Some of the things which make Hotstar more popular are;

Game of Thrones, Modern Family, How I Met Your Mother, Sex and the City, Prison Break, I’m Dying Up Here, Silicon Valley, Castle, and Homeland.

Hotstar follows in the footsteps of its ancestor’s and has a minimalistic look, much like many of its predeceasing Google Play Store applications from the time of Android Marshmallow. No novice will have a predicament browsing through its content . Any user can easily tap on shows which they want and it directly opens up in a video player, it hardly takes 5 seconds to look for what you want to watch.

At times it feels like the app can read your mind since the results you’re looking for pop up right at the beginning. Apart from this, the app’s homepage contains all the popular movies and tv shows.

Hotstar struck the bull’s eye right at its inception. The marketing maestros realized how to pierce the Indian digital market; by streaming the 2015 ICC Cricket World Cup that too for free. This penetration pricing strategy would pave a 6 lane highway to success in a coming couple of years. This strategy enabled them to tap into the potential developing market before the likes of Netflix could use it to their advantage.

Hence, to the Indian users, Hotstar is more of a familiar and popular option than the sorts of Netflix. With an audience of hundred to five hundred thousand users, its number of downloads is as same as Netflix.

Hotstar initially offers a trial run or “Free plan” for its users, for a period of one month. To use this Free Plan, the users have to sign up with their e-mail id, which shall also be required later on, if the user wishes to continue with the Premium Plan. The Premium Plan is priced at rupees 200 a month and the user can discontinue it at any moment he or she wishes to.

Moreover, Hotstar, this season, has come up with a new pass for all the football lovers called the Premier League Pass priced at rupees 999 for a period of 9 months, after purchasing which, the users can live stream or watch the highlight of each and every English Premier League match on their android devices.

The Hotstar.com website looks absolutely the same as their streaming app. This initiative undertaken by the app developers is commendable as there are many websites whose android applications have a completely different user interface. This proves to be very confusing and uncomfortable for users who keep shifting from the website to the app and vice-versa.

The app is location specific however and can be used only in INDIA. To use the services of Hotstar from another country, users need to log on to the website; hotstar.com

A Final Reflection of Thoughts

Rated at a high 4.3 with 3.2 million votes and half a million downloads, the Hotstar app is quite a performer on Play Store. It, however, like every app, does have some drawbacks related to a buggy interface, especially after heavy usage of the app as it keeps storing cache which hampers the apps ability to perform. Users generally complain about how the app, even after purchasing the Premium Plan, comes up with a message saying, “Something is wrong, try again”. This is essentially due to the heavy cache stored on their devices, which when cleared allows the app to perform optimally.

More complaints such as the lack of a multi user account, weekly premium packs and the bit of delay to upload the freshest of content are more serious issues which need to be addressed by the team to counter any competition such as Amazon Prime and Netflix. The application is however quite a performer and has the ability to serve the needs of a regular user pretty well.