Since its successful venture in Kolkata, where it provided free WiFi to the citizens, Jio has taken up a huge challenge, to monopolize the Indian telecom industry, and has overcome it with skill, dedication and with a traditional swagger. The secret to Jio’s success can be found in their penetrative pricing techniques, effective marketing, with the most affordable plans along with subsidiary packages like the subscription to their whole arsenal of applications. Jio Music is one such application from Reliance Jio Infocomm Limited’s arsenal which comes subscribed, along with all the other applications, once the users get their monthly recharge done.

When it comes to uniqueness in the features, this app certainly aces it. Music can be streamed for free on Jio Music and the collection is quite impressive. Furthermore, users can use any song as their caller tune as Jio Music provides them with an option to do the same, only if the users are signed in to the app by providing their Jio number.

The app, however, is still updating caller tunes for different songs in their database and so users might not find the caller tune to all songs just yet.

The app also allows users to download their favourite tracks on to their phones so that they can enjoy them offline whenever they want.

Additionally, Jio music has a section called radio, in which users can enjoy classics from the likes of artists like Guru Dutt, Sanjeev Kumar, R.D. Burman, etc. The radio section also has music sorted according to the genre which is played in real time radio programs. 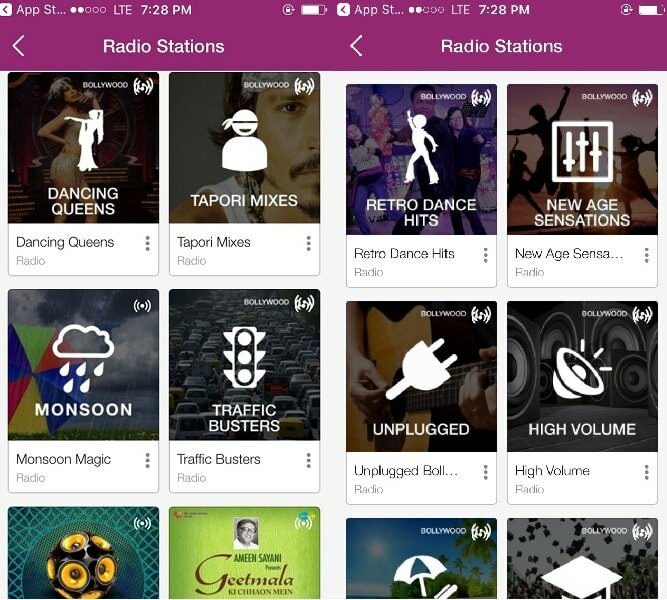 Moreover, the application offers its users playlists which are curated and handpicked by experts and critics in the industry. The application also features a top 20 list for the users.

The initial reaction and impression of any user, after going through the app as a first timer would be that it is really smooth, can be easily navigated by any lay man and has a smooth feel to it when one browses through the app. It respects the material design concepts and hence, uses the same in its architecture.

The app further offers its users a feature, which is much needed, in which the users can toggle between a light theme of the app and a dark theme of the same.

This proves to be extremely useful for users who have problems regarding light sensitivity and also for those who strain their eyes by being heavy users.

The Jio Music app is essentially an android app and cannot be used on browsers such as Chrome on the desktop. The application is also available for iOS and can be downloaded from the app store on any apple device. In addition all the mentioned platforms, the app can also be enjoyed on a smart TC through screen casting from any android device.

As the app is for mobile devices, below the are the very same link for both the platforms. Download Jio Music App From Google Play & App Store. Also, My Jio App has linked all the Jio Apps under a single hood.

Jio Music, being just nearly a year old, has gained unprecedented momentum and popularity on the play store and app store. So-much-so that it actually is seen as a future threat, if not a present one, to applications abroad such as Spotify.

In just over a year, Jio music has had nearly ten million downloads with over four hundred and ten thousand reviews, rating it an impressive four point five on the Play Store.

The app store version of the application, however, is rated as a three from an average of three hundred and thirty reviews with issues such as app lag due to high cache.

The JioMusic app is a godsend for users looking to download music through a Playstore or Appstore application for free. It can, though, improve its user experience by including more songs in their caller tune list and also on their collections.

Furthermore, by concentrating on the Appstore version, the app can ensure its position, enjoyed by only a few apps in the market, in which both platform versions of the app has a rating of four, if not more. JioMusic has a long way to go but certainly, knows the proper path to its destination.