The JioTV is an app for watching Live TV whereas the Jio Cinemas is the app for watching the movies, TV shows, and music videos. They claim to have to have more than one lakh hour of content in its library which include various movies, various music videos and also TV shows which are quite popular.

Jio is an initiative to by Reliance Telecom Pvt Ltd that cemented their authority in Telecom sector with the launch of attractive call & data plans. Jio Cinema is one such goody by Jio that has grabbed the eye balls of every Indian cinema & soap lover. With the inception of services like Hotstar and SonyLive, Jio has hammered the market with its free streaming service named as Jio cinema.

The age of modernizing entertainment has already arrived, Jio has rolled the dice on the very right moment. let’s dive in and find what it has to offer and whether it’s worth using or not.

Jio Cinemas has many features which make it a favored app by the masses. One of the features is that people can watch any video from where they left it the last time from any other device which is compatible. It is possible to browse for any type of content based on the category, language and the genre that the audience is trying to look up for.

The app covers recommendations for the user which are personalized and are based on the early choices and preferences of the user. Audiences can search for their preferred movie based on the voice. It supports voice for searching movies and contents. With the latest update, the app allows its users with the help of smart download to download the content and watch it offline later.

The user can browse content with more than a lakh hours which is available on the app. The user can also choose the quality of the video. The downloading has two options viz Download Now and Smart Download. The Smart Download helps the user to download the content during the Jio Happy Hours.

Not everything can be downloaded but only the movies which have an option of download. 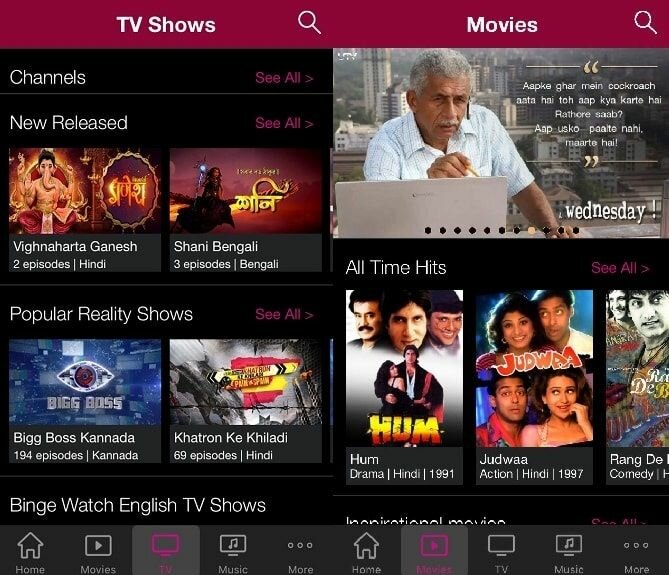 The genres include animation, action, romance, drama, documentaries, biographies etc. the latest addition to this section includes movies like Housefull 3, Tamasha, Bajirao Mastani etc. It also includes Disney movies like Bolt, Tangled, The Jungle Book etc. and other Hollywood movies like Catch me if you can, Munich, Transformers, Marvel Movies etc.

It also provides its users with yours with numerous music videos in many languages including Regional languages and English songs. This includes musicians from around the world like AR Rahman, Britney Spears, Sia, Coldplay. It also has different trailers of movies and shows and also unique clips from various TV shows.

The Jio Cinemas App can be downloaded by users with both Android and Apple phones. The interface of Jio Cinemas is much similar to that of YouTube and it has been adjusted to appeal to the needs of the audience in India. All one needs is a decent internet connection and then people can watch any number of shows on this app without any disturbance.

It is known to be popular especially amongst the Jio users but still, it hasn’t hit the bull’s eye. There are many more additional features that need to be incorporated and bugs to be fixed for people to prefer this movie app over the other. There are many more movie apps which provide latest movies in different languages than what Jio does.

The best aspect of Jio Cinemas is that it’s available for free and hence it attracts the folks. If they use it to their advantage and fix these minor glitches, then it can reach the top of the movie apps. With the recent upgradation, it has already joined the leagues of the other movie apps.

The user can watch JioCinema from any phones supporting android, apple, Tizen store. It can be played on any laptop which an internet connection. It also supports chrome cast and cast it on the television set. The users can use their JioFi for a prodigious and stupendous experience of watching.

The user can connect the chromecast to the device and press the icon which represents cast. For users without JioFi, they can use the Jio data to access JioCinema. This will let the users watch the content with smooth experience and entertainment.

All the Jio apps are free and not requires the users to pay a subscription fee.

The same goes for Jio Movies. All the browsing and watching is for free and the user can download some of the movies which have the option of download. You can download Jio Cinema from the links below.

The overall rating of the app by the audiences is four star. It is said to have the only handful of new movies and hence it needs to update its library as far as the movies are concerned. Even though there is a download option, most of the movies are not being provided with that option. There also needs to be more of Hollywood content to attract the customers towards this particular app.

With the updated version of the app and addition features, this app comes under the same position as that of Amazon Prime and Netflix. Since it has been recently updated there is still many more features to be updated for the app to be called as the number one amongst the Indian folks.