In present times, anime has become quite popular and the number of global anime fans is increasing every day. The culture of anime has stood the test of time and has come out to be successful. Hence, it has become pretty obvious for the owners of the anime websites to launch their in-house free anime apps for the same so that more fans can enjoy the anime shows on their mobiles and tablets. Already platforms like Crunchyroll and Animelab are up with their own app but they are not completely free.

The benefits of having apps are intangible. The joy of binge-watching your favorite anime shows is unmatched. While on a go, these App can help you with all your anime queries. We recently featured manga readers for our manga lovers. Now let’s explore the best free anime apps available for Android & iOS. Given below are the absolutely free apps that can be used both on the Android and iOS supported devices. I’ve mentioned the link to Google Play & App Store. 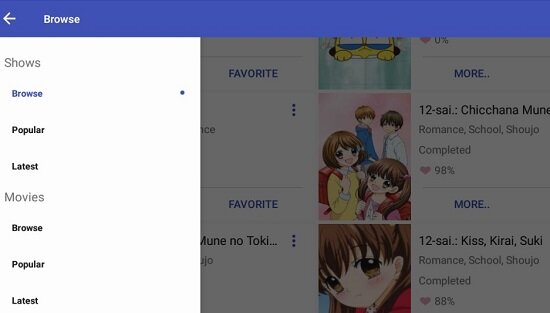 The app is perfect for the ones who love watching the original version of anime or wants to get accustomed to the anime language. One gets to enjoy all of his favorite anime in HD. With the available options, one can get to watch anime along with its subtitles and can also view it in the English version. It’s claiming itself better than kissanime or any other anime apps available.

Besides being available in English and Japanese, the app also allows the viewers to enjoy their anime shows in Portuguese. With quite a simple design, Animania is known for its interruption-free working and the streaming and downloading is also quite smooth. The global anime fans have been a fan of this app as it allows viewing anime shows on the smartphone. 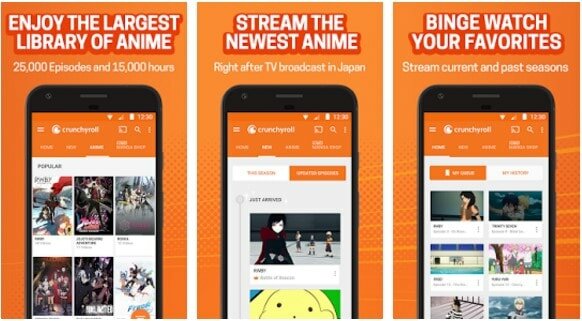 This anime streaming app is one of the favorite destinations of the anime lovers where they can stream over 25,000 episodes of anime for a total time period of 15,000 hours. They consist of the most popular anime series along with the latest ones. One can easily enjoy the episodes of the most popular anime like Dragon Ball Super, NarutoShippuden, Attack on Titan and One Piece.

The Premium version provides the user with all the privileges as they sign-up for the 14 days trial option.  Besides the fun, the anime app is also designed intricately with all episodes sorted into seasons. This app is perfect for the ones who want to be in touch with the latest anime from Japan. 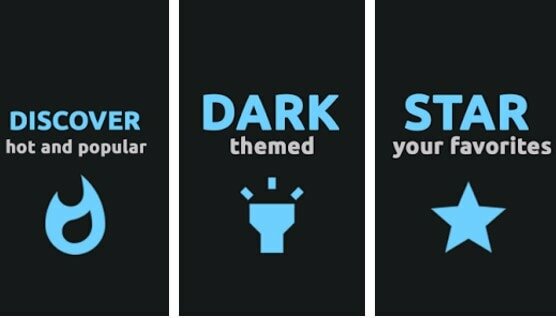 An idea so simple, yet efficient. Animedlr is one such anime app that connects the user with numerous websites to watch anime on Android. The app doesn’t host any links and only fetch videos from the various anime platforms.  It’s among few apps from where users can download as many episodes as they want of their favorite anime.

With great quality video episodes of anime get loaded extremely fast on this free app. Besides downloading, one can also stream the episodes of a particular season without wasting any time. The user interface is extremely easy, fast and simple to use. Every platform listed/accessible also lists the number of series available. You can choose a more popular platform for the latest anime series.

It is one of the famous free anime apps which allow anime lovers to get complete access to all the anime episodes. The user can simply enjoy the anime episodes by signing up just for free. The two most important sections present in the app are TV Series and Movies. Besides, there are a few sections in Movies that divide it into categories based on its genre and production year.

Both the series and movies are available in different languages. One can also enjoy these without even signing up. New content are updated on a regular basis. One can also subscribe to his favorite channel for receiving the regular notifications along with the latest news. With a simple design, one can enjoy his favorite and latest shows without any hassle. 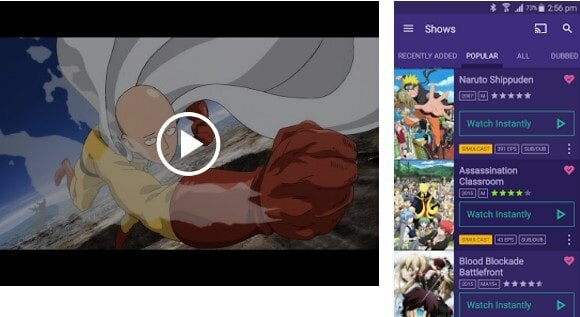 Animelab app provides the user with access to a large number of anime movies from different genres.  By downloading the app, one can enjoy watching over 500 titles of anime. The free version does not have all the episodes but whatever it provides is sufficient for watching it 24 x 7.

New anime gets updated on a regular basis. One also gets an opportunity to enjoy anime shows in different languages.  The app also provides the user with the option of downloading the anime episodes so that they can be enjoyed later even if the person does not have an internet connection. Using the app is quite easy as it has a user-friendly interface.  One can easily find their favorite anime by simply searching for the same in the search bar.

The app allows anime lovers to watch HD content along with the anime trailers. The users also get the option of rating every anime. One can easily find out his favorite anime as the app includes hundreds of titles of anime in HD. New videos are updated on a regular basis. One also gets to enjoy some additional and interesting stuff like gaining points by watching the anime. The app is priced at $2.99 while the ads-free comes for $5.99.

One also gets the opportunity to create his own library of anime and can also review the anime list that he had watched before. It comes with all the functions that one wants to have in his gadget. The major setback has come after the app has been removed from the Google Play store.

With the frequent use of smartphones, anime apps have also gained tremendous popularity over the last few years. Most of the apps are frequently being updated so that they can meet the expectations of the anime lovers and can serve a larger population. Apps get banned and removed from the play store due to policy violations.

Here, I’ll keep updating the list with few more anime streaming apps and the majority of them will come with no price tag. Till then you enjoy anime with the listed app. And do share if we missed any popular app that you have been using on Android or iOS. So, do bookmark this website for all the future updates. Read & share