Antivirus Apps for Android are all time popular apps when we go and search play store. After all, no one wants to compromise with the security for their device. Like I always say an Android is known for its awesome Apps. Now we will find what exactly is required to keep your android safe from viruses. So, if you are here you might be in a dilemma which Antivirus Android App is best for your Android mobile phones and tablets. You must be wondering not to compromise your security and privacy.

However, some people like having this additional security or just want to be very careful in every case, and there is nothing wrong with that. In this list, we will check the best Antivirus Apps for Android and Anti-Malware applications on Android! We support you in protecting your android from malware and virus. We have rounded App both free and premium apps that are tested and rated best for providing protection against viruses and malware. Have a look at these apps and chose the best for you.

All these apps are well renowned and some have already gathered a lot of fame by providing protection to windows users. All though we’ve mentioned only About smart phone but these are App suited for protecting tablet from viruses. 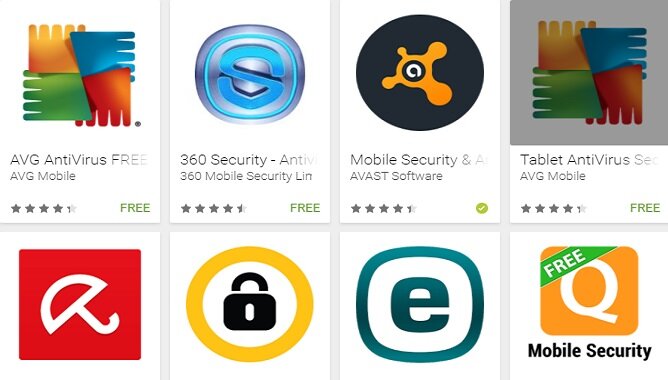 360 Security antivirus, the Most Popular App till now and is highly rated Android antivirus apps available right now with over 150 million downloads and 11 million ratings resulting and in a 4.6 overall rating. This antivirus and the anti-malware app come with a ton of features, Including the Ability to scan your device for malware files, use real-time protection or scan your apps and games, and even comes with anti-theft feature. Use the app’s built-in cleaner and boost the service if you want. Perhaps The Most Useful feature for this one is an app lets you lock and password Protect any app on your device.

Avira Antivirus Security is a relatively recent and less known antivirus application, but it is growing rapidly in one that people seem to really love. It comes with the basic stuff such as scanning of the device, the real-time protection, and even the ability to scan the external SD card. It also includes modern features such as a Stage fright counselor to help you work around this particular vulnerability. There is also an anti-theft feature, having the characteristics of privacy, characteristics of blacklists, and administrative features of the device. It is a heavier antivirus application in comparison to 360 security. It has a paid version also which costs around 12$ per year.

Bitdefender Antivirus Free is perhaps the lightest most discreet option on this list of best Anti virus for Android . It has exactly two features that are to scan and clean your device and offers antivirus protection in real time on top of that. The real-time protection scans applications as they are installed and keeps an eye on what they do well. Scanning is simple and only takes a few moments to do everything.

CM Security is a decent App when it comes to virus protection and anti-malware support as it was ranked high on AV-TEST repeatedly for several years now. In addition to its anti-virus and anti-malware features safety, CM also includes one of the best locks of applications we’ve used (it has same fingerprint scanner support now) that not only locks your applications, but takes selfies people trying to nose around your business. It is much lighter than some of its competitor’s brand and is good and it is totally free for everyone. After all, everyone prefers free apps. And this is the only reason why it’s has been rated so high on Play store.

Malwarebytes has an extremely exceptional good reputation for the PC users due to its light weight, perhaps, it follows a clear cut no nonsense approach for finding and removing malwares. The Android version too is not much different. As we said, it focuses primarily on antivirus, anti-malware and anti-spyware protection. Its main features are scanning the device and promising real-time protection. On the other way round, this is a simple application that does not use a ton of system resources. Proving a bane for old devices, low-end devices, this app also helps those who do not want to hiccup while running an antivirus app. Quite Similar to its Pc version this app is known to provide you the best protection in its android version as well.

If you are really very conscious about your security and privacy then you need some solution to protect you from the brink of risks. Nobody will like to have their device affected with Viruses. The antivirus app listed below will provide you best protection and a variety of features. Some apps can provide a boost in the device performance as well. We have kept in mind the ease for low-end devices to download and install the antivirus software from play store because not everyone likes to fall in low storage trap as it slows down the device.

So, you are free to try these apps one by one and choose your favorite in the world of protection from all the malware threats. We have worked to provide the links of best lightweight antivirus app for android.

I hope that you liked my post on TOP ANTIVIRUS APP FOR ANDROID. Keep visiting for more such updates. If you have got something important to say or have something really interesting to add to this story, do not forget to comment it below. Stay happy always. Have a nice time.