TV remotes grant you immense power but you know what else does? The infobahn. And when both of them come together, you can only imagine the possibilities. Wait, don’t imagine. The output is out there already! We’re the most evolved generation yet, and we want more.

Finding the latest TV series or flicks has become easier than ever. The majority of the people also use free illegal sites to access that type of content. All this, at the click of a button. Not to mention the cable TV networks that feature such content quite commonly. It’s ferreting out good quality indie movies, documentaries, or acclaimed foreign films that are difficult. Netflix has been satiating the needs of a movie lover since a decade but it does not cater to everyone’s taste. For those who aren’t too inclined towards mainstream entertainment, there’s Popcornflix.

In case you’re unaware, Popcornflix is an ad-supported OTT service that was launched by the stellar indie movie production giant, Screen Media Ventures. It had been conceived as early as 2010 but was officially introduced to the audience in 2011.

Users can watch a legion of stuff including TV shows, movies, and cartoon classics for free. Originally, the service was available only in the U.S. and Canada. Soon, it garnered a lot of attention, leading the creators to expand their brainchild into other regions.

Today, Popcornflix can be accessed in the U.K., Australia, Germany, France, and New Zealand as well. What’s more? The service is absolutely legal.

Similar to other services such as Snagfilms and Crackle, the highlight of Popcornflix is that you get a massive media collection to stream for free. However, is it worth your time and attention? Let’s find out!

As of today, Popcornflix.com boasts of a massive library with over 700 movie titles and more than 2000 shows and documentaries, with new ones being added regularly. Of course, you cannot compare the collection with paid services like Hulu or Netflix but if you’re a cult movie rooter or love old cartoons, horror films, or documentaries, you wouldn’t be disappointed with Popcornflix.

Both, the site and the app are incredibly easy to use. The content is mainly divided into TV and movies. Under TV, you’ll find thumbnails sorted under categories like “most popular”, “90’s TV”, and “Popcornflix TV”. Some of the most-watched ones on the platform include “Cheaters”, “The Man Show”, “ReGenesis”, “Urban Legends”, and “Kathy Griffin: The Collection”. 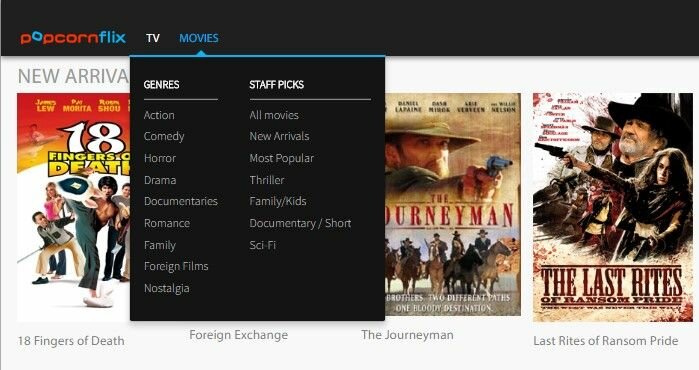 Movies are categorized into various genres like Action, Drama, Comedy, Horror, Romance, and Family. Other sub-genres include “Foreign Films”, “New Arrivals”, “Documentaries”, “Sci-Fi”, and “Most Popular”.

This surely makes it very convenient to browse through the titles as per our preferences. You can watch movies like “Austin Powers”, “The Journeyman”, “Futurespot”, “Don’t Look in the Cellar”, “Fight Club”, and “Fast and the Furious”. If these aren’t enough, you’ll be glad to know that in an interview, founder Gary Delfiner said that their aim was to add 50-100 films in a month.

Many of the documentaries on Popcornflix are sourced from biggies like BBC, Discovery, National Geographic, and the like. These range across a slew of topics like travel, wildlife, history, etc. The most popular ones are “Operation Valkyrie”, “Untamed with Davey Hughes”, and “War Horse: The Real Story”.

To be honest, the video quality is quite average across titles, especially when you compare it to paid services. Most of the shows and movies are available in DVD quality. Even though it’s not as clear as HD, they are audible and watchable.

We think that the interface is clear-cut, sans complexities. However, one thing that we’d like to bring to your notice is that the design and layout is slightly inferior on the web compared to the app on other platforms and devices. Also important to note is that there were absolutely no issues with regards to buffering.

Coming to the biggest pain-point, advertisements, you’ll be happy to know that compared to other free streaming services, ads on Popcornflix are much shorter and less frequent.

You’ll see them play every 15 minutes or so, each one being maximum 30 sec long.

Popcornflix can be enjoyed on the web, with App on Android & iOS devices, Windows 8, Xbox One, Xbox 360, Playstation3, Playstation4, Amazon Fire TV, Roku, and certain Smart TVs including brands like Samsung, Panasonic, and Bravia. The company is working on developing the app for other platforms as well so that more users can jump on the Popcornflix bandwagon in the near future.

Do They Have Any Paid Plans?

If you absolutely abhor commercials in between content, you could pay about $0.99 and rent certain titles for an ad-free experience. However, this isn’t available for all the titles and is not the chief focus of Popcornflix.

If you’re looking for your B-grade movie fix or love watching good quality documentaries, Popcornflix will prove to be THE streaming service for you. Just to understand where the service stands in terms of content, we think that the library is slightly poorer in quality when compared to Crackle and similar when set side by side with Tubi TV.

For a free movie streaming service, Popcornflix has a superlative interface and extensive platform support. As long as you don’t care much about the ads, you must definitely check it out.